Brenae’s career in agriculture stemmed directly from hours of enjoyment planting flowers and picking weeds alongside her grandmother. She soon began raising pigs and joined Future Farmers of America (FFA). While still in high school, Brenae’s grit and determination eventually earned her an academic scholarship to study crops and horticulture science at California State University, Chico.

“Receiving a scholarship to pursue my dreams in college was the make or break for me. I don’t come from a very affluent family but I had really big dreams,” she said. 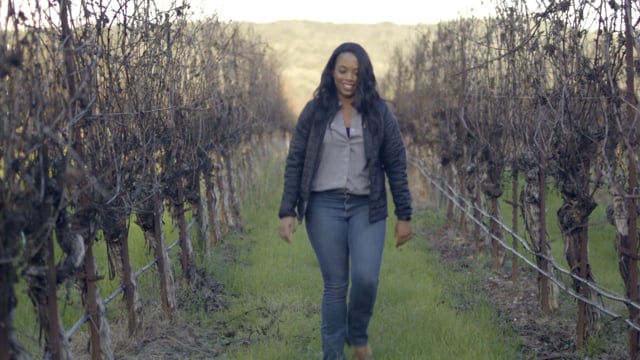 That FFA scholarship secured her path in agriculture, but it took two equally fortuitous additional events to lead her to viticulture. She sipped a glass of wine that won her over and shortly thereafter met her future winery colleagues at a recruiting event. Success quickly followed.

By 2015, Brenae was named Ranch Manager for Monte Rosso Vineyard, an iconic property where grapes are grown for the likes of Mount Peak Winery. “When I started, it was intimidating. Here I am this 24-year-old coming in to manage Monte Rosso, a world-renowned vineyard and one of the oldest in the state. It’s difficult and complex but I love it,” she said.

She’s also happy to report that her grandmother, who also enjoys wine, couldn’t be prouder.